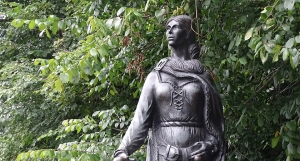 Gráinne was born in 1530, at Clare Island Castle, County Mayo. Her clan had been sea-faring before the Normans came (1172). ’Terra Marique potens’ (Powerful on Land and Sea) was the family motto. Gráinne’s ships traded with Scotland, France, Spain and Libya.

Deadly rivalries existed between Gaelic, Gaelicised, English, Anglicised, and Norman cohorts of society. Gráinne, as a little girl, saw that outwitting enemies brought survival. Gaelic Law on Lineage established a leader’s political power. There was a complex interdependency between clans. 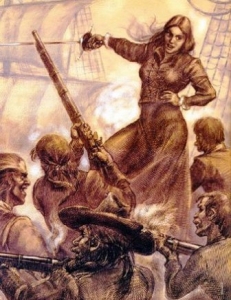 Gráinne wished to go to sea. Her mother wanted her to learn Scots Gaelic, French and Latin – the lingua franca of the gentry. Gráinne begged her father to bring her to Spain. She was educated instead. She was finally allowed to sail for Spain when she cut off her beautiful hair and put on boy’s clothes. She got the name ‘Gráinne Mhaol (bald Gráinne)‘ for this.

In 1546, at 16 years of age, Gráinne married Dónal ‘of the Battle’ Ó Flatharthaigh. He showed his wife how to board ships. She fished, traded and served her people well.

In 1565, Dónal died in a dispute over a castle. His widow, at 23, and returned to her clan in Mayo, with many fighting men. Her children stayed behind, to protect their inheritance. Showing their Lineage was critical for their welfare. For Irish-speakers, names are still meaningful. 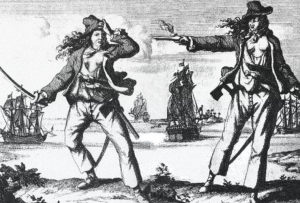 Legend tells of a lord who stole property from Gráinne and fled to a church for sanctuary. She waited for the thief to emerge, saying he could starve or surrender. The thief dug a tunnel and escaped. The hermit, who looked after the church, broke his vow of silence to say she should harm no-one who sought sanctuary. She had not done so.

Her ships were fast and could outmaneuver English merchants. They must pay a toll or have their cargo taken. The title ‘Pirate Queen’ did not come from Gaelic Law. She had been long inured to threats. During an attack from an English ship once, she climbed the rigging. Her father below was assaulted, from the rear. She jumped down and landed on his attacker. 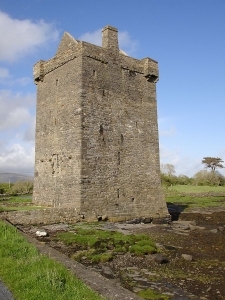 To maintain her position in the face of English Settlers, who increasingly occupied lands cleared of Gaelic families, she had to make a new alliance. Gráinne went to the door of Rockfleet Castle, in 1566, and proposed marriage to ‘Iron Richard’ Bourke, who worked iron ore deposits.

In 1558, Iron Richard, aiding his father David, against Richard Burke 2nd Earl of Clanricarde, had led 1,200 Scottish Gallowglasses (mercenaries) into battle. Scots often fought the English here. All of Scotland, Ireland and the Isle of Man formed one unit, held together culturally by bards and poets.

Tradition says the couple married, under Brehon Law, ‘for one year certain’. Gráinne gained control of all Clare Island and Clew Bay, as well as her new husband’s Rockfleet Castle. She divorced him after one year, calling out of a window to him: “Richard Bourke, I dismiss you”. With mutual agreement, she kept her husband’s castle and remained his ally.

From another clan, Richard Sassanach Burke, 2nd Earl of Clanricarde, was debauched, as was his father, Ulick of the Skulls Burke, the 1st Earl. He, noted for savagery, had accepted his English title from Henry VIII, under the ‘surrender and regrant’ procedure. He so became Protestant. His son was called Sassanach (Saxon) by locals, who reviled the family’s disloyalty to Ireland. [The name ‘British’ was adopted after the Saxons had wiped out Jutish names and placenames in England.]

Ulick had had offspring from three wives and other women. In any event, Richard eventually became the 2nd Earl and he also had many wives and concubines (impoverished Gaelic women), mostly alive at the same time. He had ‘put aside’ his first wife – the mother of a legitimate son. He accused her – a woman of high birth – of practicing witchcraft. The Gaelic Brehon Laws did not allow the practice, of anglicised gentry, of using daughters as disposibles. In 1567 the Earl, in an abyss of moral turpitude, sought from Queen Elizabeth I, the grant of lands taken from suppressed religious orders.

Gráinne, in any event, chose Clare Island Castle as her stronghold, over Rockfleet and her other castles. Clare Island was at the centre of her marine realm. She used to tie the mooring ropes of her galley to her bed, through her bed-room window, to be able to go on board at a moment’s notice. 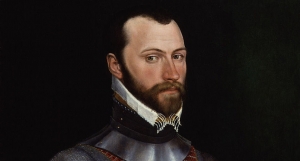 For want of other income, her taxing of English ships resumed. One unsuccessful raid ended with her imprisonment. She was released on her promise of stopping this. However, times were increasingly difficult for Gráinne, as English law gradually spread and Gaelic title to land was extinguished. Minor Gaelic nobles gave into threats and force, to avoid disappearance.

Gráinne adhered to Gaelic laws and practices, in the face of growing English oppression and flagging clan loyalties. In 1580, after 15 years of battles and negotiations, Iron Richard, was granted a knighthood by the English governor of Connacht, Sir Nicholas Malby. He was also given the highest title in Connacht, the MacWilliam title.

After the two men died, Sir Richard Bingham was appointed as Governor to Connacht – in 1584.
Bingham considered that “The Irish were never tamed with words but with swords”- setting armies against civilians was a colonial practice. He suppressed a rebellion in 1585, by various branches of the Burkes, with great severity. A force of 2,000 Scots Gaelic mercenaries later came to Connacht, to assist the Burkes. They were routed with a great slaughter.

Bingham captured Gráinne, in 1586, and planned to hang her, now 56 years of age. However, he pulled back from this. Her cattle, land and ships were taken. She fell into destitution.

Richard Bingham conducted a quiet but bloody war, extinguishing the Gaelic Order, over thirty years. He arrested Gráinne’s sons, Theobald and Murrough and her half-brother Dónal of the Pipes – a Musician – in 1593. Gráinne petitioned Queen Elizabeth I. Bingham, fearing charges had been laid against him, fled to England.. Gráinne made an historic journey, sailing up the Thames, to meet with Elisabeth, who had ruled England after Henry’s death, in 1547. 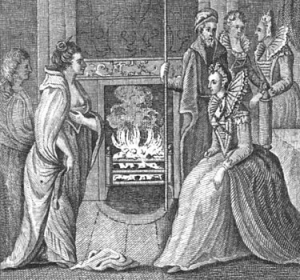 Wearing a fine gown, Gráinne met the Queen at Greenwich Palace, with members her Royal Court in attendance. Their only common language was Latin. Gráinne did not bow: they were both queens. They had both suffered personal distress. Elizabeth’s mother, Anne Boleyn, had been twice betrothed before her secret wedding to Henry in 1533. He executed her in 1536, for treason and other charges, marrying Jane Seymour (his third of six) the next day. The two women could reach an agreement.

Elisabeth released Theobald, Murrough and Dónal. Gráinne was to provide some naval service and not tax English merchant ships. In the Nine Years’ War, which followed (1593-1603), Bingham returned and in 1594 troops were quartered on Gráinne’s lands. Ulster’s Hugh O’Neill and Red Hugh O’Donnell, the last great chieftains, opposed English assimilation. Gráinne must support the rebels.

Gráinne died in her early seventies at Rockfleet Castle, c1603, when Elizabeth also died. Gráinne had honourably maintained the practices and principles of Gaelic Civilisation. She lives on in folk memories, as the most magnificent of loyal women. In her day, we were still fully Irish-speaking, adhering to Gaelic laws, which dated back thousands of years ~ and could have served us further. They were still used in Donegal, in sheep trading, in my father’s younger years.